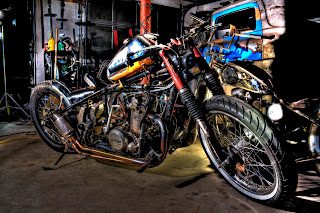 Ok, so I admit to being biased... really biased... but this KTM thumper chopper absolutely drives me nuts.
I have been wanting to build a attack chopper out of modern water cooled motocross thumper since Yamaha introduced the 400 back in the day.
And every time I get a ride on any of the modern thumper-crossers, all I can think about is how much fun I could have with it if it was stuffed in a light rigid frame with a nice front end.
My brother owns a new Honda 450 and I swipe rides on it every chance I get just to try to imagine what it would be like.
So, you can imagine after all these years of daydreaming how excited I was to see Paul's KTM on the web.
Paul was nice enough to send me some pics and to tell me a bit about his little slice of attack chopper heaven.

I used to spend a lot of my time wondering how light I could get a modern thumper chopper... I thought that with horsepower numbers in the low to high 50's (Yes. That's right... 50's... you really need to test ride one if you never have.) that you could REALLY make one fly... but I had NO CLUE how light you could really go.
Paul made it to 220 lbs.
I don't know about you guys... but I haven't been able to sleep at night thinking about that number... 52 horse, 220 lbs.
That's insane.

Anyway, here is what Paul had to say:

"I picked up the 2002 Ktm 520 real cheap off some guy in NH three years ago. I trail rode it for about a month then ripped it apart. I had the front loop off a mid 60's triumph sitting in my pile along with the Bsa front end and figured to put them to use. After building the hard tail rear end welding the front axle point higher on the forks I had to figure out how to run the radiators behind the motor with out it over heating or getting vapor-locked. Took some doing but the thing is a rocket and you can beat the shit out of it. My basic approach to building a bike is to keep the front wheel tucked as close to the frame as possible with maintaining around 3 and a half inches of trail. Along with sitting way below the rear tire any bike will take the corners like a rail.
Some of the pictures are with the old sporty tank that leaked and the new ones are of the 70's husky tank that's on it now.
It weights 220 pounds. As far as the radiators go. We did over 200 miles on a ride last year stopping for nothing but gas. I never felt a thing and I have the seat slammed right above the radiators. If the radiator temp was to over heat I took the drain plug out of one of the radiators and put in a thermostat that kicks in at 250 degrees and turns on a electric fan between the radiators. Think about this, if you can sit in a mud hole spinning your rear tire for ten minute on a dirt bike it would take a lot to over heat on the road." 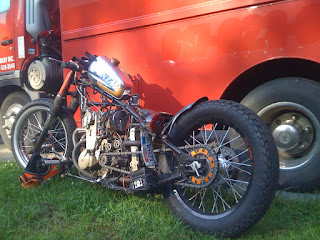 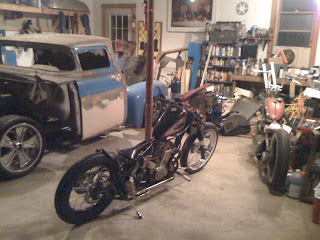 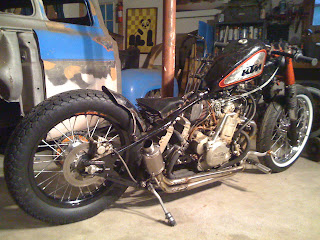 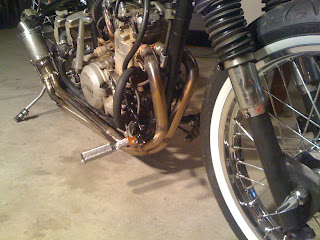 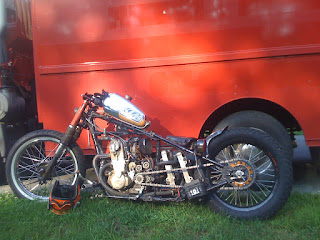 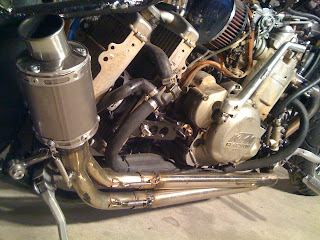 Totally wicked.
Thanks again Paul... you are a man after my own heart.
Really appreciate the pics and info... I'm off to browse E-bay...

Oh, and here are some shots of Paul's current project: a drop seat Ironhead with some craziness going on up front! 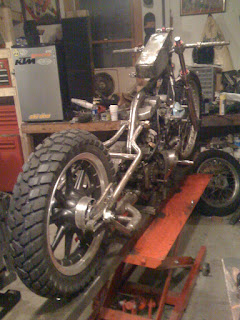 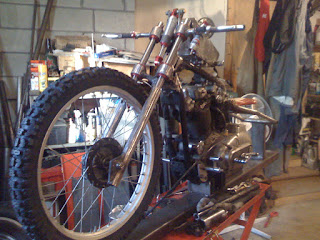 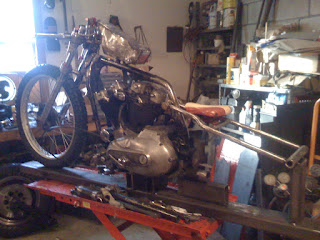 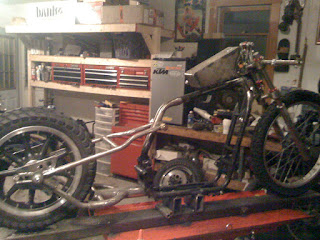