Total Heros: My Brothers in the NFK- PART 2

Bird:
That reminds me of something I have wondered about for quite a while now:
Does the NFK have a lot of trouble with the police? Or are the cops pretty relaxed in Japan?
Yan:
The last few Corerides, the police realized that we run on the high way at super high speeds.
They were waiting for us. We recognized there was a police car in front of us. But we never stop.
I passed Police car over 120mph, then they start chasing me.
They didn't chase us from behind; they came right up beside of me. side-by-side chasing, man!

Yan:
No leader. No prospect. We are just friends.


Bird:
Are most of the NFK members living in Tokyo?

Yan:
Well, you are an NFK member living there in Nebraska, Knucklehead Steve is living in NY, and Shadows Oliv lives in France,
I’m here in Tokyo, Joytoy and Disk both live near my house and there are a few others…
But yeah, I would say that NFK is mostly based in Tokyo.


Bird:
Ok, let’s shift gears a bit here.
I know that you are a bicycle messenger during the day now; does all that crazy messenger riding affect your motorcycle riding skills in the city? I would think that it would have to… probably really speeds up your reflexes… my brother use to race motocross and he always was looking for other things to “cross train” to help him learn better balance and riding skills. I had never thought of being a bicycle messenger until now. How has that affected your riding style on your motorcycles?

Yan:
Well, I would have to say that riding a Bicycle is kind of the same but still very different from a motorcycle.
The speed is obviously very different, and the maneuvers are very different.
And riding a bicycle in the city, especially a fixed gear bicycle, is very dangerous, so I ride carefully.
I guess it really hasn’t changed my motorcycle riding that much.

Bird:
Ok, cool…don’t you and some other NFK members ride your bicycles in that RxKxBX roadkill night run thing too? Tell us a little about that.
Yan:
Oh, yeah. We were going to the RxKxBx run every time last year.
Many of NFK members got fixed gear track bikes. It was so fresh riding bicycles together and being outrageous in the city.
It was the same as the Bosozoku, man. No rules. Red light go style. It was so much fun.
And at the same time, we were kind a tired of the Tokyo chopper scene from 2007 to mid 2008. Not fun.
So we escaped to the bicycle society, Ha, ha! There was a lot more freedom. and no politics.
Man, RxKxBx is fuckin nice. It’s the same kind a community as the NFK. No Limits No Laws style.
No president, no prospect, we just wanna have some fun! That's it.


Bird:
Do you still ride that red Triumph chopper? That was supposed to be for your wife right?

Yan:
Yeah, I got that Triumph chopper from Choppahead in Boston for my wife. It’s actually still sitting in the garage! 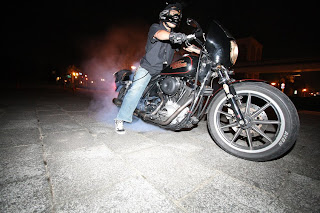 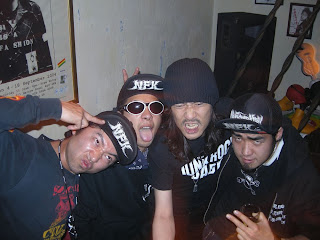 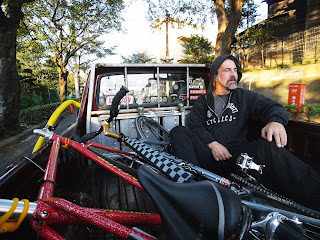 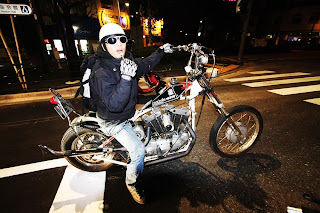 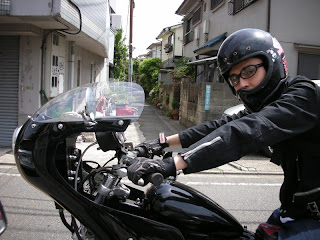