What Would Mad Max do? Part 2 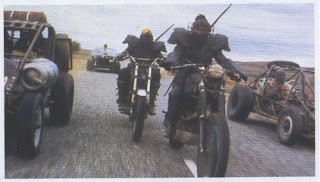 Recent conversations with the one and only Tom Rose have caused me to spend even more time thinking about the “What Would Mad Max Do” theory of crashability and motorcycle engineering.
Tom suggested (rightly so) that I expand the WWMMD theory to include his theory of “compatibility” .
The theory of compatibility is simply the intentional incorporation of consumable parts in your post apoc motorcycle or attack chopper build that can be found in multiple industries, vehicles, and geographical regions.
For instance: Bearings, points, chains, sprockets, ect that can be found in tractor shops, car parts stores, and other places.
I have it on good authority that even car tires if narrow enough work on the rear, can handle decently, and last and insane amount of miles.
(Think Air cooled VW width, not big wide stuff.)

Tom has gotten his FXR back on the road with just parts from a Massey tractor shop.
And he has over 200,000 miles on his FXR so I guess he might know what he is talking about!

Now, I’m dead serious about this theory people. It’s no joke.
This can work for you. You can use this thinking exercise to build very capable attack choppers that will hold together and survive crashes, hard commuting, traffic battles, and big miles.
Think carefully … for example:

How about magnetos and no batteries people?
How many good batteries do you think there are going to be after the bomb?
I mean… for a while sure… but eventually?
Ok, so no bomb… what about a plague? Same concept.
Is your friendly battery truck going to stop by and replenish the shelves with nice, clean fresh working batteries?
You scoff, but so what if that’s abstracted from our reality?
The thinking exercise is still legit. It works… think about it:
You had been running… for some time… you really had to wrap it up hard to get away from the last batch of scavengers. If you had just been 30-100 lbs lighter from ditching your battery, starter, battery box, solenoid, wiring, and brackets, you might have been able to speed out of the way of that chain that was swung at your arm back there… man that stings…tore out a lot of hair too…. You wonder if you have ANY hair left under the blood and dirt.
You were riding across central Kansas when they found you the first time.
They haven’t been able to ditch them the whole way across the state… are you still in the state?
You can’t remember how long it has been. They just keep finding you… bloodhounds with v8’s and pointy sticks… Man, you used a lot of gas up trying to get ahead of them… would have saved some if you were just a bit lighter.…but you got free finally… who knows how long you have till they find you again. Minutes? Hours? Days?
No, it won’t be that long… it will be soon. That 4 car pileup you left for them won’t stop them for long.
You better hope you can find some gas somewhere up ahead… check some wrecked cars, check the farms….oh wait… there aren’t any farms out here… no farms at all….you really are in trouble.
You’re tired, dirty and sore. You have cuts that are getting infected and you need to clean your wounds, and there isn’t a town for a hundred miles. Maybe more.
You have to stop to pour blood out of your boot, cool off in the shade, clean out the pus and stitch yourself back up, get a drink, hunt for food, watch the horizon, clean your guns, sharpen your crossbow bolt broad heads… and when you go to leave?
You’re battery is toast. Shot. You knew it was getting weak, but you haven’t seen any bikes to scavenge a battery from in months. Besides… the last 6 or so you did check were more dead than your current turd of a battery.
And you don’t even have a kicker… but even if you did… you don’t have a magneto… so sorry sucker.
You lose.
The dogs of war are bearing down on you… soon you will have to make stand… nowhere to hide, nowhere to barricade yourself… it ends here… all because you were running a battery and no magneto.
Sucks to be you. Hopefully they will be hungry and will kill you quickly instead of playing with you while they roast you on the rotisserie like they did the last straggler that they caught with a dead battery.

Now…. you think that none of that fictional situation is relevant to you?
Think carefully:
-Have you ever ridden ANYWHERE that didn’t have a gas station or a bike shop every 15 miles?
-Have you ever ridden ANYWHERE that a breakdown would have meant exposure to dangerous situations?
-How about exposure to dangerous people?
-Can you perform emergency medical treatment on yourself, or do you need to get to a sterile medical facility when you get injured?
-Have you ever ridden somewhere that didn’t have a restaurant or truck stop every 15 miles?
-Do you carry food and water in your saddlebags?
-Do you feel like pushing your bike miles at a time perhaps in the rain, heat or cold is fun, and a great way to get a workout?
-Have ever done the math and realized that another mile or two per gallon would have gotten you safely to that next gas station instead of being stranded?
-Have you ever been hit by a car because your bike couldn’t accelerate fast enough to get out of the way of the incoming vehicle?
-Have you even been hit by a car or truck because your bike couldn’t swerve or make a lane change fast enough?
-Have you ever had people harassing or chasing you on the highway in their car or truck (or another bike) and your bikes ignition system OR BATTERY was weak and your bike kept misfiring and you weren’t able to get away from them? (Happens more than you think!)
-Have you ever broke a part because you hit a huge pothole by accident…or rode down a seriously destroyed road… and you realized that the bracket or part you broke would have survived if your bike was lighter and therefore the suspension would have taken the jolt better and never have transferred that much force to your components?
-Less weight means less damage when you crash guys. Simple math.

And don’t get me started about batteries and vibration, cold, heat, ect…. That is one seriously flawed system right there.
But all that can be avoided my friends… just run a mag and no battery.

And remember the core principle behind this theory: If your bike could survive in post apocalyptic vehicular combat… wouldn’t that bike serve you exceptionally well NOW with today’s crazy traffic, beat up roads, and cell phone wielding car drivers?
Of course it would.
So here are some questions for you to think about:
1- Which would survive vehicular combat better: Air cooled engines, or water cooled engines?
2- Which would survive a crash better?
3- Which is easier to repair in the middle of the wilderness or in a post apoc world?
4- If it is the air cooled motor that is superior … is the sacrifice of the greater performance of the water cooled engine a worthy trade off? (Remember the definition of sacrifice: Giving up something of great value for something of greater value.)
(I am speaking here of the two extremes: The Ural vs. a 2009 Japanese sportbike. But of course there is middle ground: An air cooled Ducati Vs. a Honda CX500 for instance. There is a lot of flex in this area which is why careful thought is needed.)
5- How prevalent is clean water and antifreeze in your imaginary situation? What are you going to fill that radiator with if it breaks or is damaged?
6- How capable are you at repairing your motorcycle? How about fabrication? Can you build a part from scrap with minimal, primitive hand tools if necessary? (Remember electricity might be sketchy at best, and power tools could be miles away. And who knows how prevalent full gas cylinders for torch welding will be? Might be wise to learn how to use a forge, eh?)
7- What about over complication? Is your bike way too hard to work on due to overly complex engineering? How many wires are in your wiring loom? Do you know how to track that short down? Do you even have batteries for that multimeter you carry? Do you think those dogs of war will wait for you while you chase that wiring issue, or that lean condition on the side of the road?
8- How prevalent are spare parts for your make, model, and brand of motorcycle? Do you carry important spares with you?
9- What are the weakest components of your motorcycle? (levers? Fuel lines? Wheels? Controls? Spark plugs?) What is brittle, exposed, soft, thin, and can take you out of the fight?
10- Is armor a viable option for the components?
11- How about merely reinforcement?
12- Do you just have to worry about crashing or are you planning on swung chains, axe handles, bars, hammers, rocks, bricks, flying bullets and crossbow bolts? How about flamethrowers?
13- Have you thought about the added weight of your new armor vs. the strength and protection you will be gaining? Again: is the sacrifice worth it? Weight will not only slow you down, but will cause every other part and system of your bike to strain harder and wear out faster.
AND lessen your fuel economy.
14- How about air flow to that motor? Did you block it with your armor?
15- What is more valuable in combat to you: acceleration or top speed?
16- How likely is it that you will have to go off road? Both to get where you need to go, and also during evasive maneuvers?
17- How necessary is rear suspension for you to Evade, Pursue and survive?
18- Can you fix your bike in the dark?
19- How many miles can you do before you run out of gas?
20- How efficient is your bike?
21- How many spark plugs, carbs, intake manifolds, and valves do you need to maintain?
22- Can you even SEE your spark plugs without disassembling your bike for 10 minuites?

These are all just ideas to get you thinking about this theory for yourself.
You can scoff at these concepts all you want… but that dude that is bombing around on his stripped down feather weight rigid framed SR500 single with dual sport tires , no battery, one spark plug, one carb and a bark busters is looking at you kinda funny… is that a machete strapped to his fender strut? 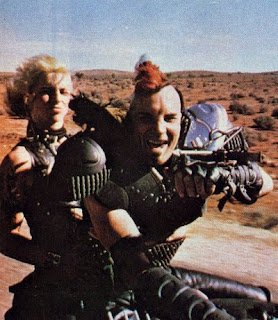