The year is 1996. I have been buying issues of Iron Horse magazine for quite a while now. There have been several articles where the editor Snow, posts pictures of a NYC builder named Indian Larry and his new project. It is going to be an STD Panhead powered chopper. All ready it sounded so different from what I was used to reading about: Light, powerful, skinny tires, everything was machined or modified, copper coated flywheels for less oil drag, an 18" wheel on the rear, etc.
I was hooked. I couldn't wait to find out more.
in October of 96' Iron Horse ran the feature on Indian Larrys Panhead. And the interview itself changed my life forever in ways that would be almost impossible to quantify.
Performance. It was all about performance.
But somehow there was still a underflowing current of high art about the whole thing.
Larry wasn't just another builder; he was a chopper philosopher, a genius and a artist.

I rushed out and bought several copies to give to my Friends who also had choppers. I assured them that this was the most important article about choppers that they could ever read.
And I was crushed when they really didn't seem to care much after reading it.
What was wrong with them? Didn't they see that they didn't have to build bad bikes anymore? Larry had shown us a way out, a door, a formula, a reason, a goal, given us a higher calling... a way to achieve something special,not just something mediocre.
Undaunted by everyones apathy, I moved on.
I immediately started making plans that my next chopper would be not just NYC style... but in keeping with Indian Larrys philosophy.
I did get off track however, and it wasn't until later when Flynch picked up the torch (but in his own way. He wasn't pushing Larry's philosophy, just his own. But the two of them bookended the core principles so nicely that they make a pretty tight cohesive worldview) and really ran with it that it finally took with me and I started to straighten out...but that is another story.
But then there was the bike. His amazing Voodoo Chile. I was so enthralled with that bike. Later articles would quote Larry as saying it was around 100 horse and 400 pounds.
Over and over he talked about the handling and balance. It's pure function. And yet just LOOK at those details! It was like a painting that I just couldn't stop staring at. High art wrapped around intteligent design. I saw new things every time I looked, amazing details everywhere. I use to wonder if the bottom of the tranny had some secret detail that I was being robbed of... I just knew that somehow Larry would have put something there on principle.
Voodoo Chile become the quintisential chopper for me. You could achieve no more than Larry had done.
And then...he went on to sell that frame and rebuild the bike into Grease Monkey with a Nickel plated frame, stonger brakes on the rear, and new paint (but just on the tank!) just as he had alluded to in the original 96 article.
There were a few more subtle changes...but the important part was that he honed the perfect weapon into a more perfect weapon.
I realized then that I must never think that I was done. Never think you have arrived. You can always refine, always improve.

Later on in 2001 we were treated to another amazing interview with Larry. More philosophical and enlightening this time it was a joy to read. I still keep both articles close and re read them when I need more inspiration.
I have scanned the original article in it's entirety here, and simply transcribed the pertinent parts of the 2001 interview.

And of course we all know about the Discovery channel fame and subsequent episodes of biker build off, which while not really revealing much of his chopper philosophy (unless you knew to watch how he was actually designing the bikes) it did reveal to me personally what an amazing man he was in real life. Not just as a abstract thinker/builder which I was forced to think of him as based on my limited revelation of his person.
He was a gracious, kind, skilled man who above all loved to ride and ride fast. But he wasn't a idiot, jerk or a drama queen to other builders and fans like so many morons out there were.
It was an amazing look into his life and I am grateful that whatever damage that show may have wrought upon our culture... at least it gave me more Indian Larry inspiration before it was too late.
Total hero.
Indian Larry. 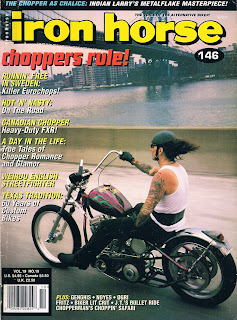 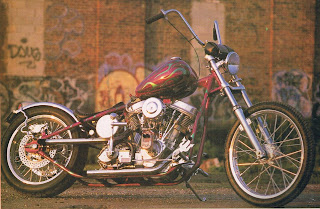 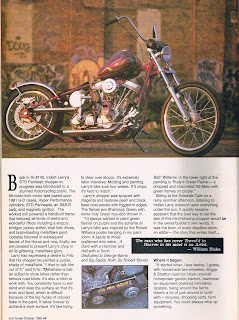 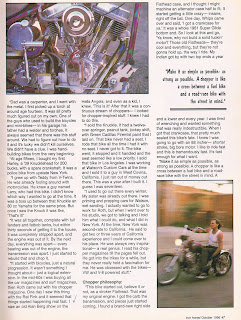 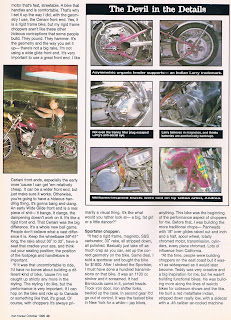 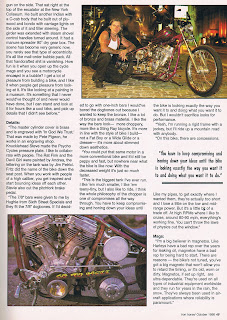 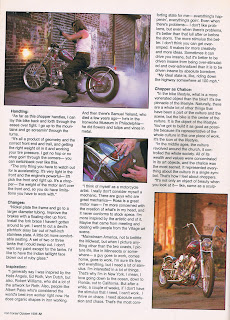 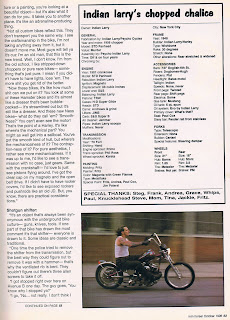 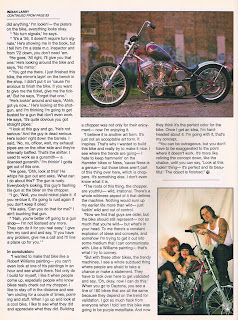 When people meet me what they do find out is that I love my bike and I love riding fast. Break-neck speeds to be exact.

You know, I’ve ridden with a lot of guys with extended front ends, fat tires, softails, and so on, but at those speeds, they just go away. That’s what a chopper is to me: Extreme hot rod. It’s not a custom. A track roadster is a beautiful bike in its own right, but it’s a track roadster and not a chopper.

I think a lot of people, the traditional bike builder appreciates the effort it takes to make a functional chopper. The wide tire fat thing is just a fad, whereas my bikes are not regulated but the current fad, but rather by 35 years of building bikes that perform like I except them to.

I don’t put aesthetics over function. I spoke a little bit of what I expect a bike to do, and if the bike is doing what I want it to do the aesthetics are fine with me. But form function and aesthetics, you really have to determine what they mean to you. A steam locomotive is a beautiful engine in its own right. A jet engine is lighter and more powerful and some would say better than the steam engine. Yeah it is, but it’s a different aesthetic.

Question: Visual balance is pretty straight forward, but in striving for functional balance where do you draw the line?

IL: Draw the line? I’ve been trying to draw that line for the past 30 years. Where’s the cut-off point? Hell, I don’t’ know. The chopper is a constant struggle between the balance of the functional and the visual. But if it’s doing the job, then it’s still functional. You need certain geometry. You’re not going to have an 80-degree rake and still expect the bike to function the way you want. So if it’s not functioning correctly then visually it doesn’t matter. It that’s what you are after, the pure visual , then you’re after sculpture, not building a motorcycle. Functional balance is the epitome of aesthetics. It has to function; it’s just that simple.

Q: the factory supposedly gives up the optimal combination of rake, wheel base, etc, and sacrifices visual balance as a result.

IL: I don’t make sacrifices with my bikes anymore. I have to find a balance where I’m pretty happy with the way it performs functionally and the way it looks visually. I think the grease monkey represents that. It doesn’t’ have a long front end, it doesn’t have a wide back tire; it doesn’t need either of them. It does exactly what I want it to do. There’s plenty of power and it handles great around curves and straights. I view it as a beautiful bike and from what other people tell me, they see it as a beautiful bike also.
And you can put it next to a Jap bike and every time even if the owner of the Jap bike is there people gather around the Grease Monkey. That says to me that the visual balance is there. As the rider, I know it functions well and conforms to my feelings on aesthetics, and the general population likes to see it.

Q: assuming the functionality of a stock H-D is in perfect harmony, how do you deviate without going to far?

IL: It’s perfect. Is it? How do you deviate without going to far? Well, who said their functionality is in perfect harmony? I can ride a stock H-D and immediately pick up on three of four things I’d change right away, and it’s a compromise. They have to target their market and comply with the DOT and the motor vehicles laws. That’s the least of my concerns. I never consider the DOT or other laws into the design of my choppers. If I felt that the bike needed no headlight on it, I wouldn’t put a headlight on it, but you need a light to see where you are going.

It’s all about chopping and eliminating what you don’t need and getting to the essence of the machine.

Let’s start with Rake. Usually I like a 30-32 degree rake. I don’t go under 30 because the bike starts getting a little squirrelish. It depends on the offset of the trees that I am using. Don’t go much over 32, don’t really see any need to because the bike is pretty stable. Upstairs I do run a steering damper-I call it a steering damper- but actually I use it when decelerating from high speed where you may have a tendency to unload the weight back onto the front end and cause a little shimmy. At that point basically with the wheelbase and the rake I am using now I haven’t had that problem. I’m still using a damper because I’ve gone down from high speed wobbles a couple of times with experimentations and I don’t want to go down again. The combination I am using with the steering damper prevents all that. It’s a good stable combination.

I don’t like batteries. It’s just another heavy part. I use kick start.

I tell you one thing, no one with a fat tired softail is coming upstairs with me like that. 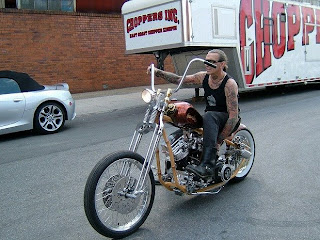 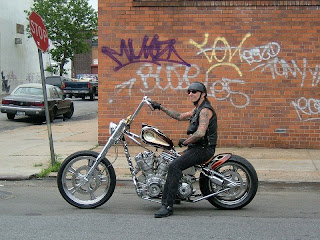 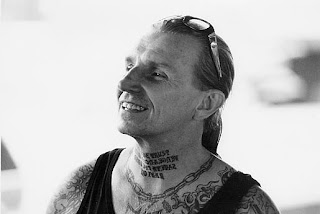 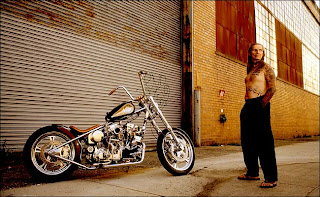 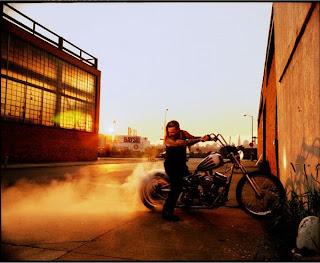 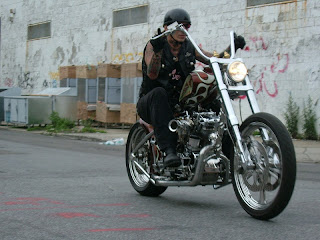 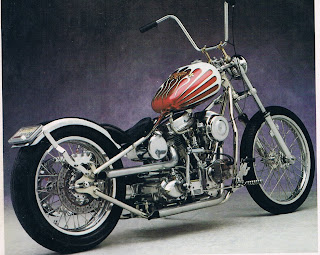 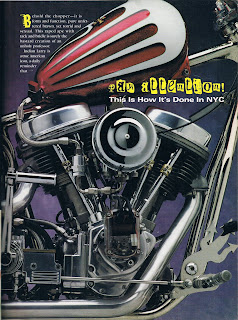 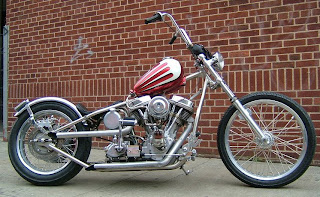